A city break in Nice

Nice is perfect for a weekend break in winter.  Getting a burst of sun helps to reduce SAD.  It’s easily accessibly from the UK and has some very photogenic spots.

We stayed in a colourful, and inexpensive hotel – H33 Hôtel on 33 rue Pastorelli.  The rooms were bright (saving on lighting costs although you may want to bring an eye mask) and the hotel was central and well located. 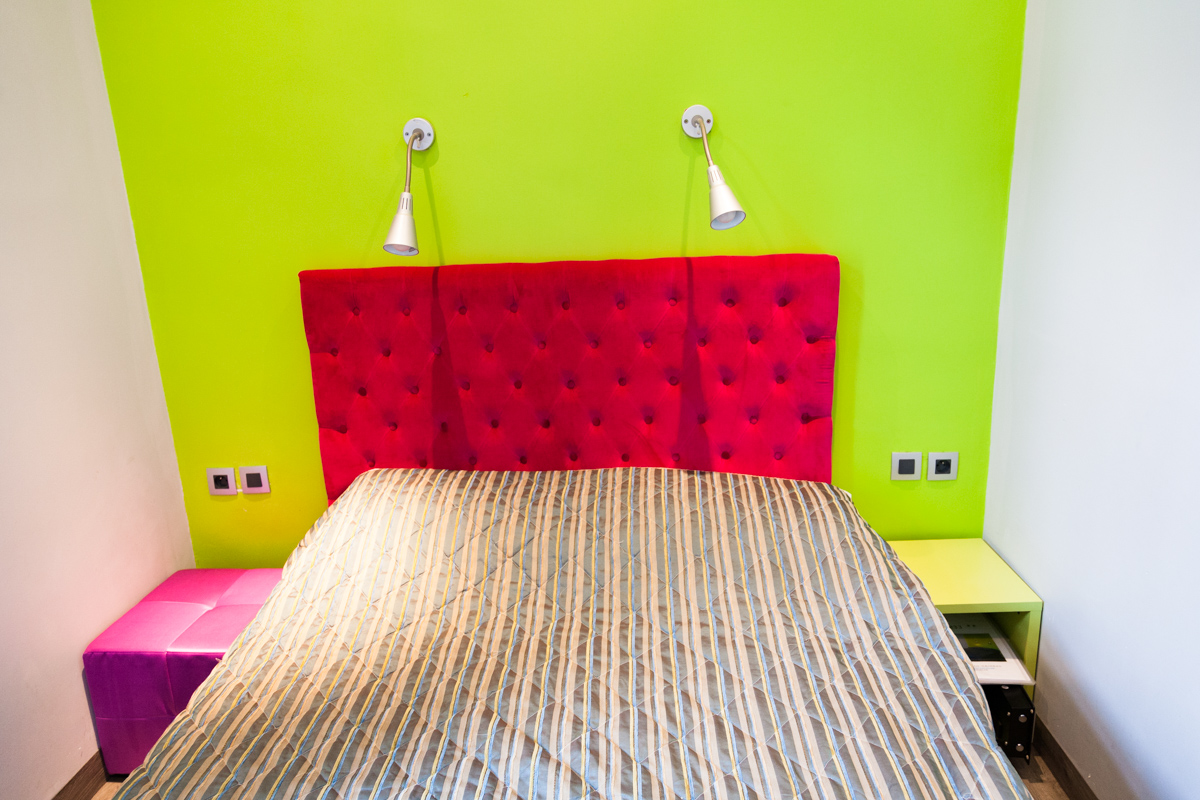 The view from the window is typical of downtown Nice.  Not the best part of town but not the worst either. 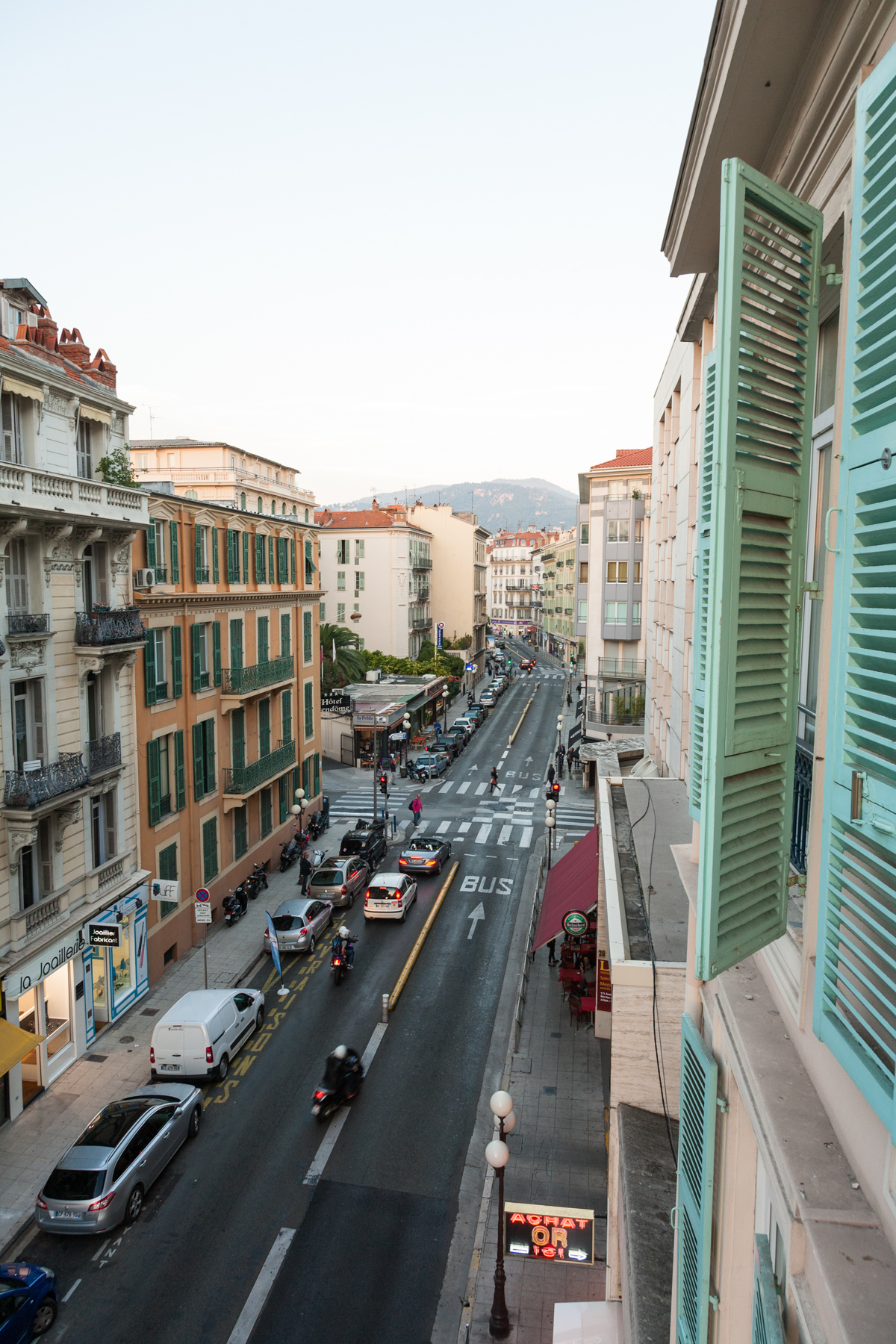 There is a long and proud history of visitors coming to Nice to enjoy the climate.  Queen Victoria was a fan and travelled there several times under the name Lady Balmoral (for reasons unknown).  Presumably not to be incognito as she would arrive with a 100 staff, a contingent of Scottish pipers piping her in, and her own personal donkey and cart.

She stayed at the Grand Hotel, Cimiez and a statue has been built to celebrate her visits.  Sadly there is no statue to poor Jacquot the donkey who hauled her up and down the hill and around the surrounding gardens.  Jacquot was rescued from a farmer and lived a favoured life as a regal donkey; enjoying a quiet off season in Balmoral. 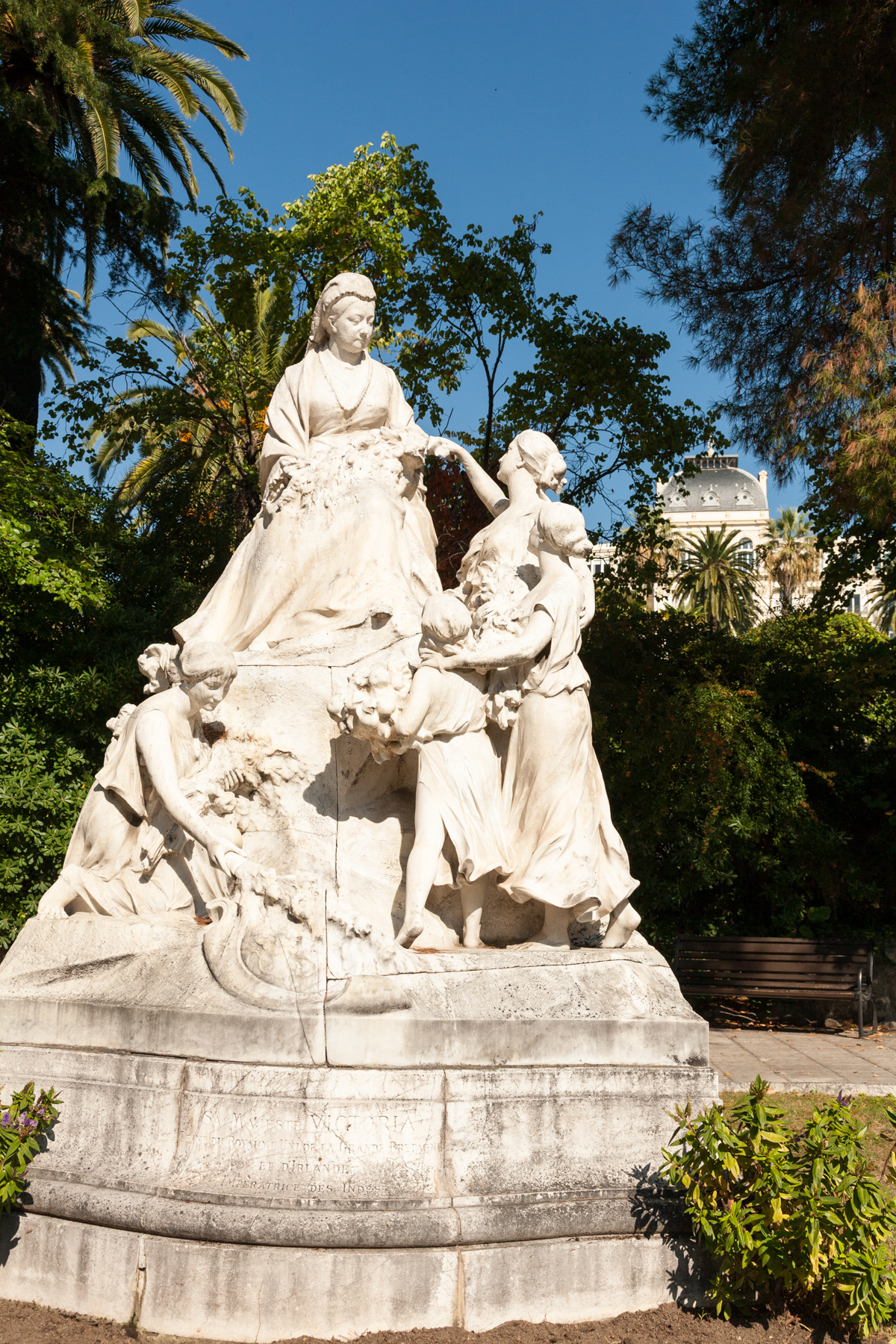 We didn’t have our own donkey so had to hike up the hill ourselves.  There was a handy modern equivalent plugged in that we passed; although it unfortunately wasn’t available for lease.   This is a much better size of car for France than the monster we eventually wound up renting!  The various decals on the side of the car are handy as these will disguise the inevitable dings and scrapes any car in France will magnetically attract as soon as it leaves the show room. 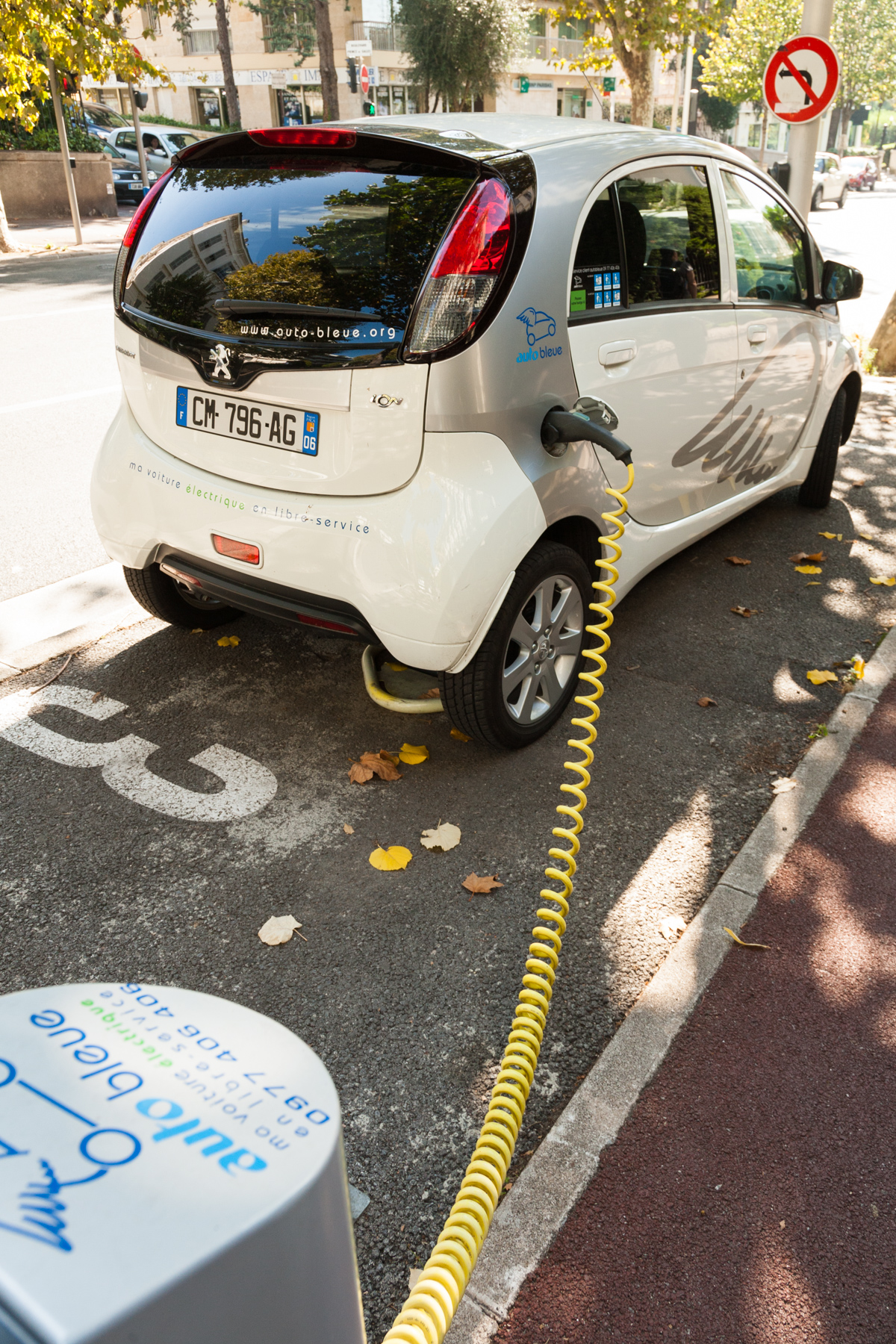 Cimiez is a beautiful area of Nice, up in the hills with some stunning parks and gardens and a number of preserved Roman ruins and a museum dedicated to Mattisse.  Well worth a visit but you may want to get a bus if it is hot.

The cathedral is worth a visit to check out.  It is a stunning building set in simple but pretty gardens. 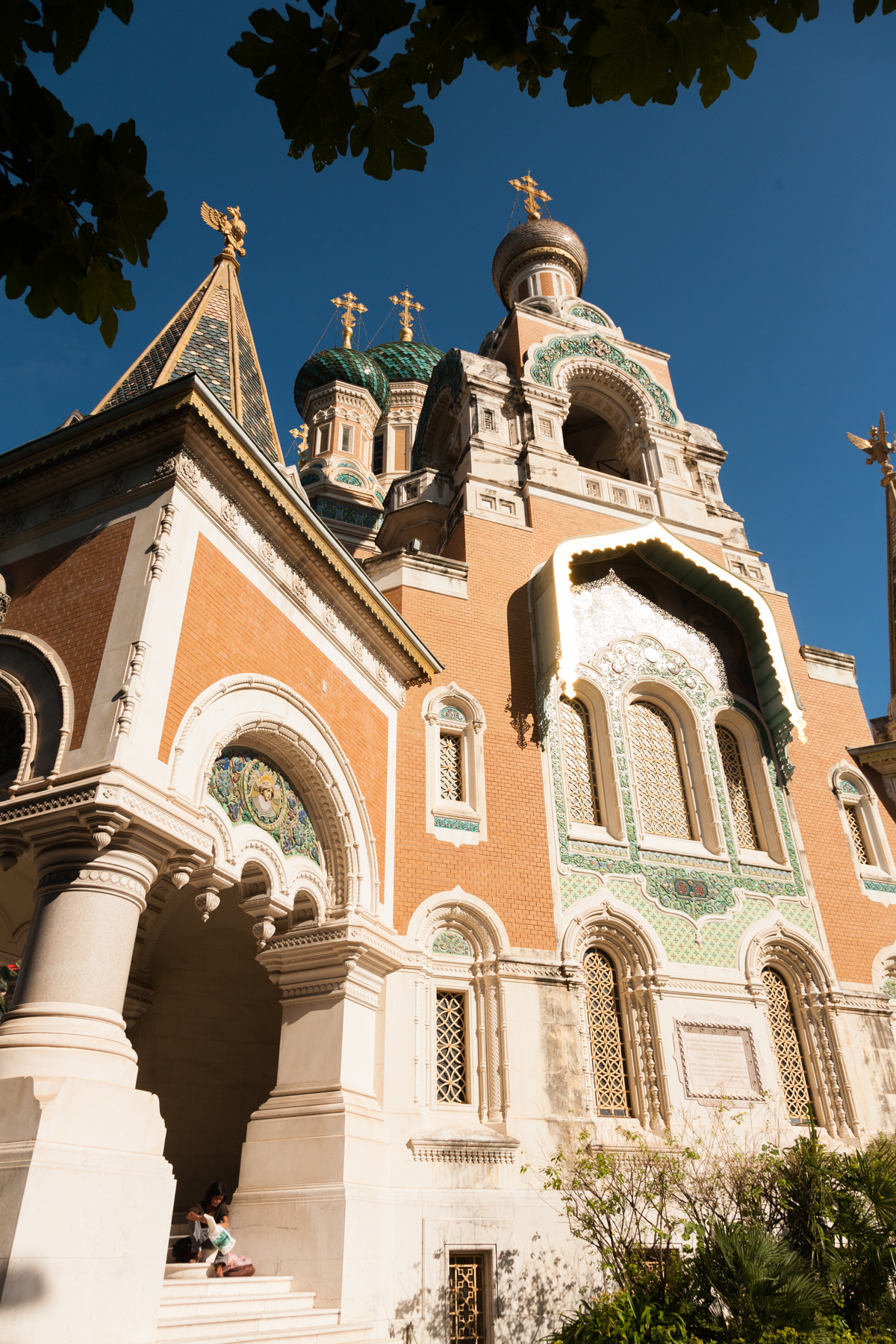 An ownership dispute has been recently resolved so you can now go inside.  The ownership dispute was between the emigre association in Nice and the Russian state who have successfully prosecuted for ownership of the cathedral as the official legal successor of the tsarist Russian Empire.   The boundaries between the Russian state and the Orthodox church are somewhat blurred and the state has claimed ownership over a number of other cathedrals around Western Europe.  The Russian government clearly doesn’t believe in the separation of church and state. 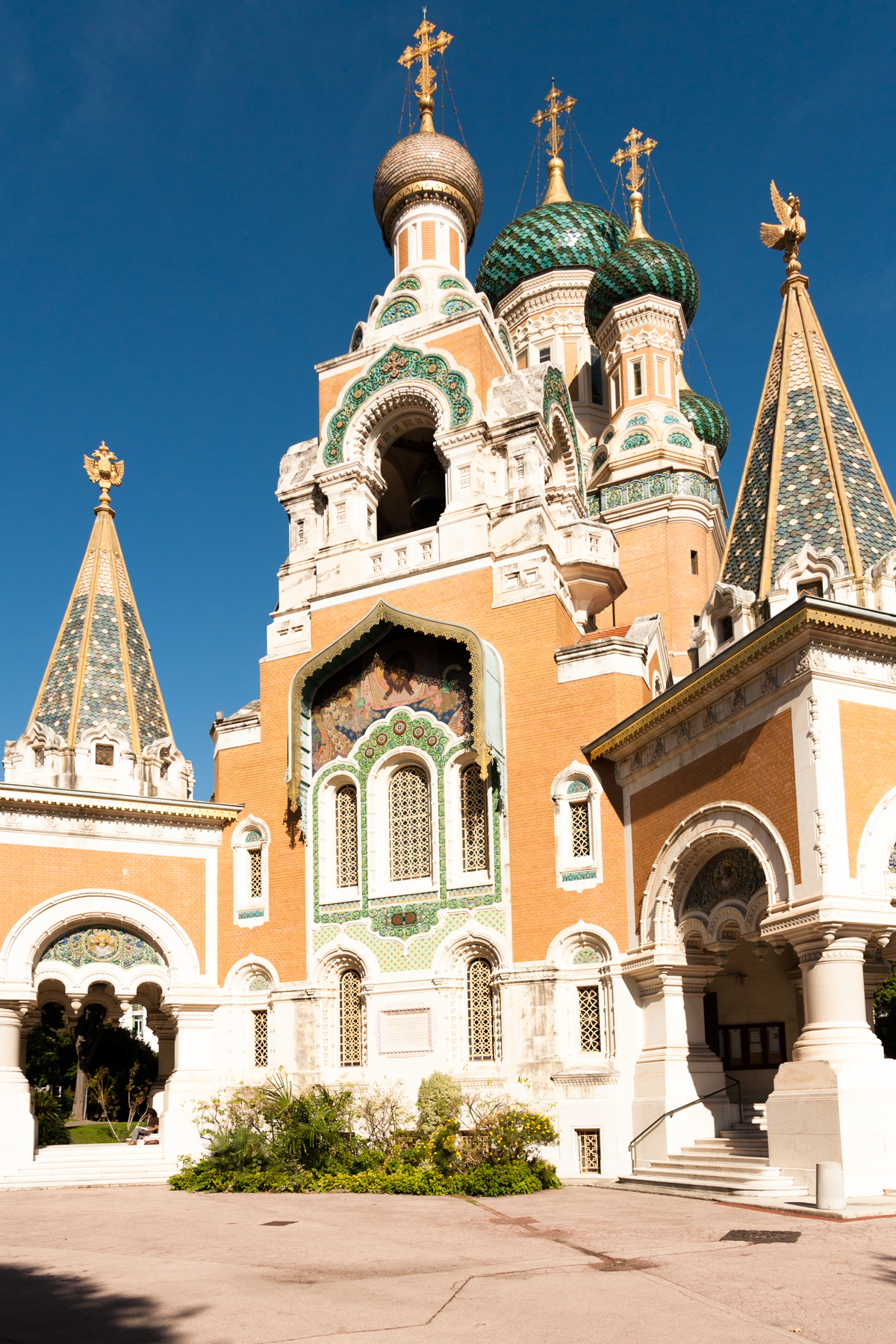 I don’t think Tsar Nicholas would have been impressed by the decision to hand the property over given the history and how his family was treated by the communists.

Regardless the gardens were beautiful and in bloom while we were there, and we could go inside as the church had been reopened following the resolution of the dispute. 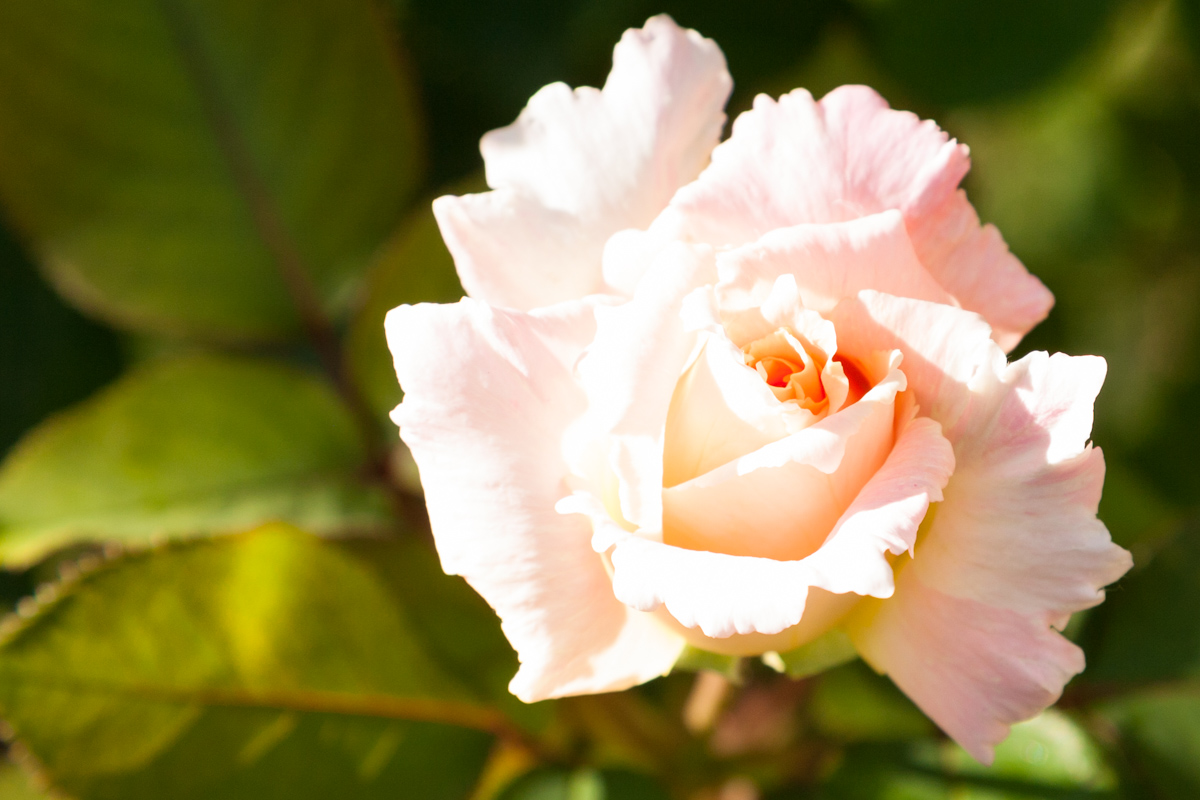 Nice is a great city to stroll around.  There are many narrow side streets that you can wander down. 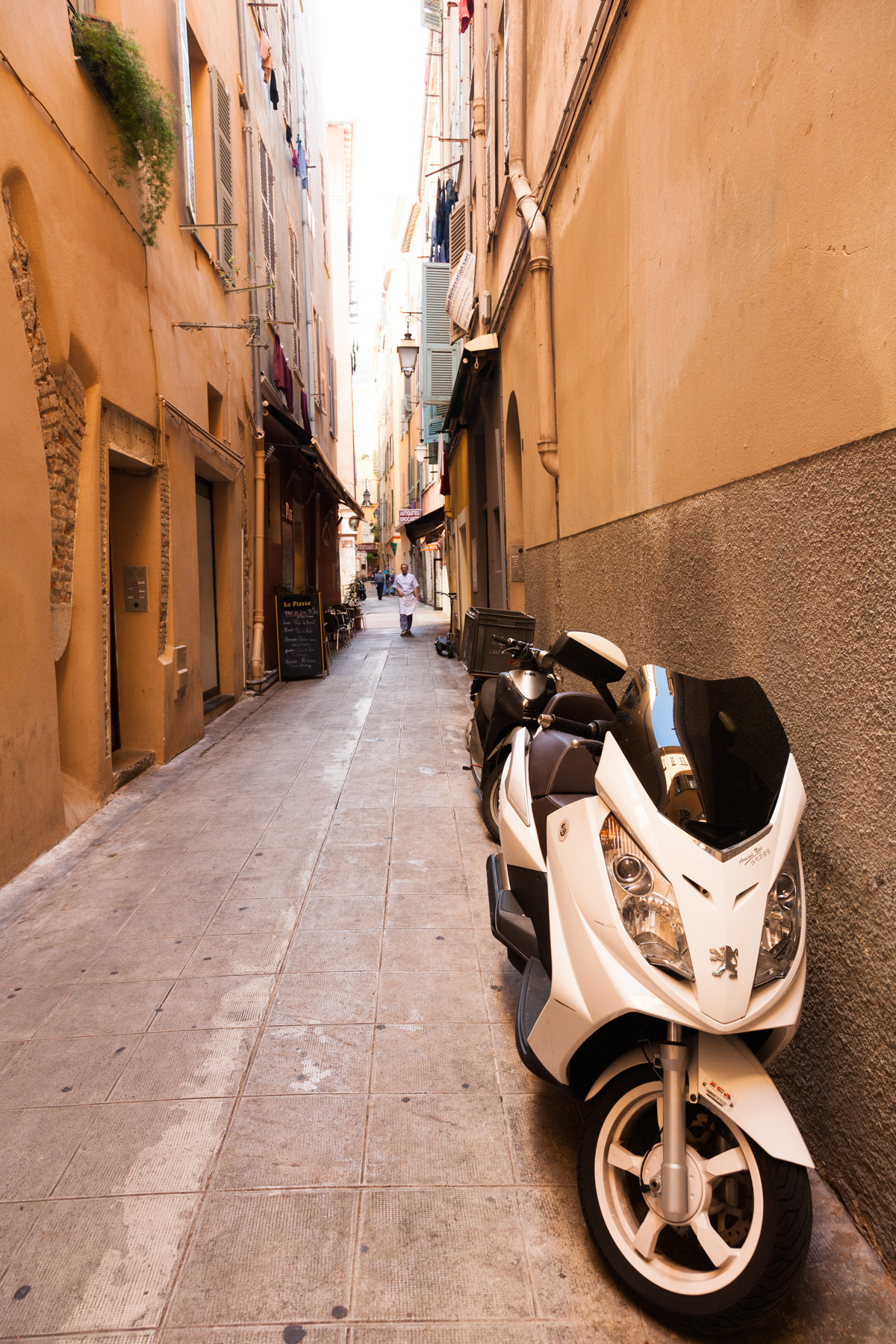 And up towards Castle Hill.  There are several galleries and small shops on the way giving you the opportunity to take a break along the way. 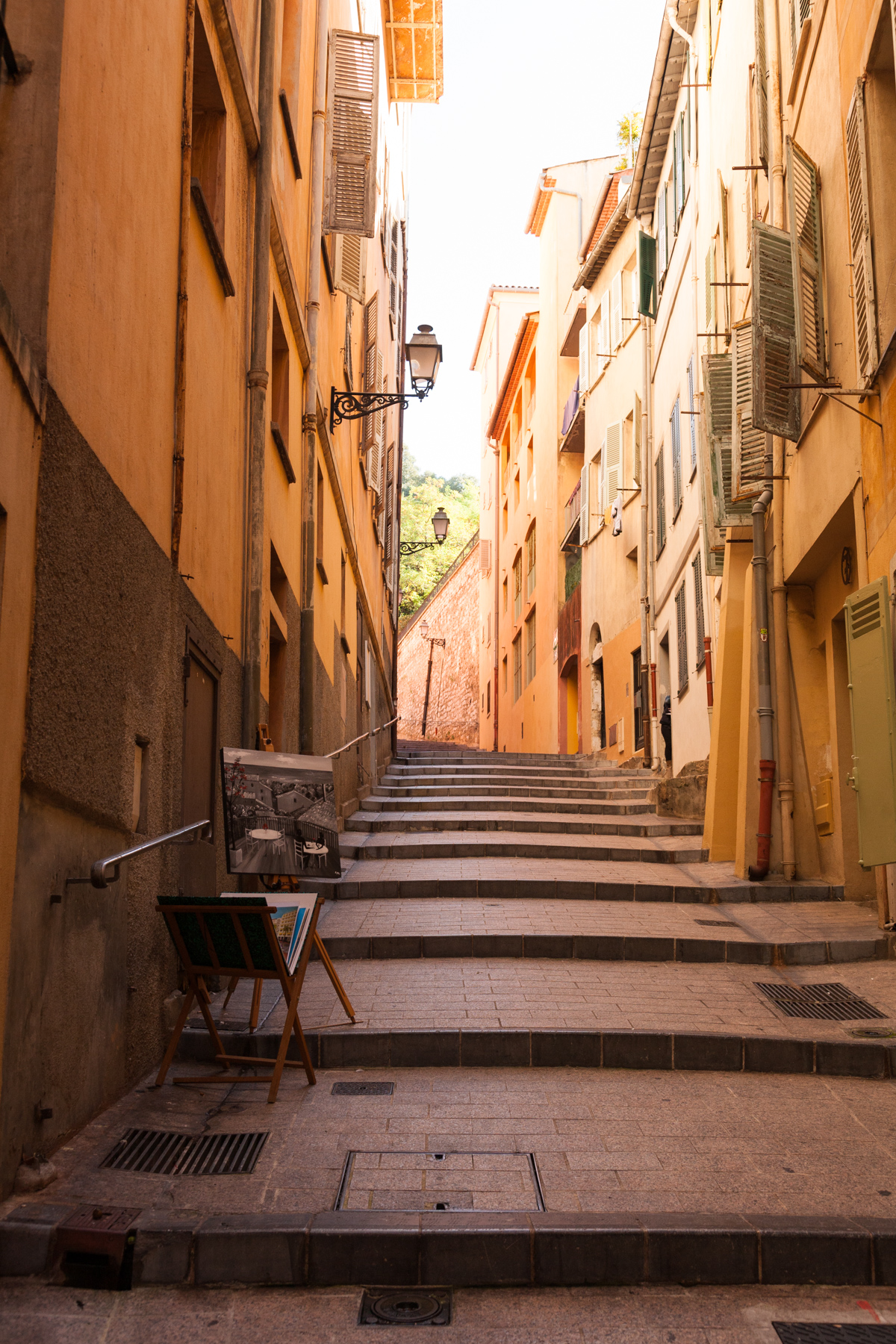 The Promenade des Anglais makes for a beautiful stroll.  You can see the length of it (7km approx) from castle hill, as well as the beautiful azure waters.  Not to mention the many sunburnt tourists.  And some hardy locals swimming in the autumn waters. 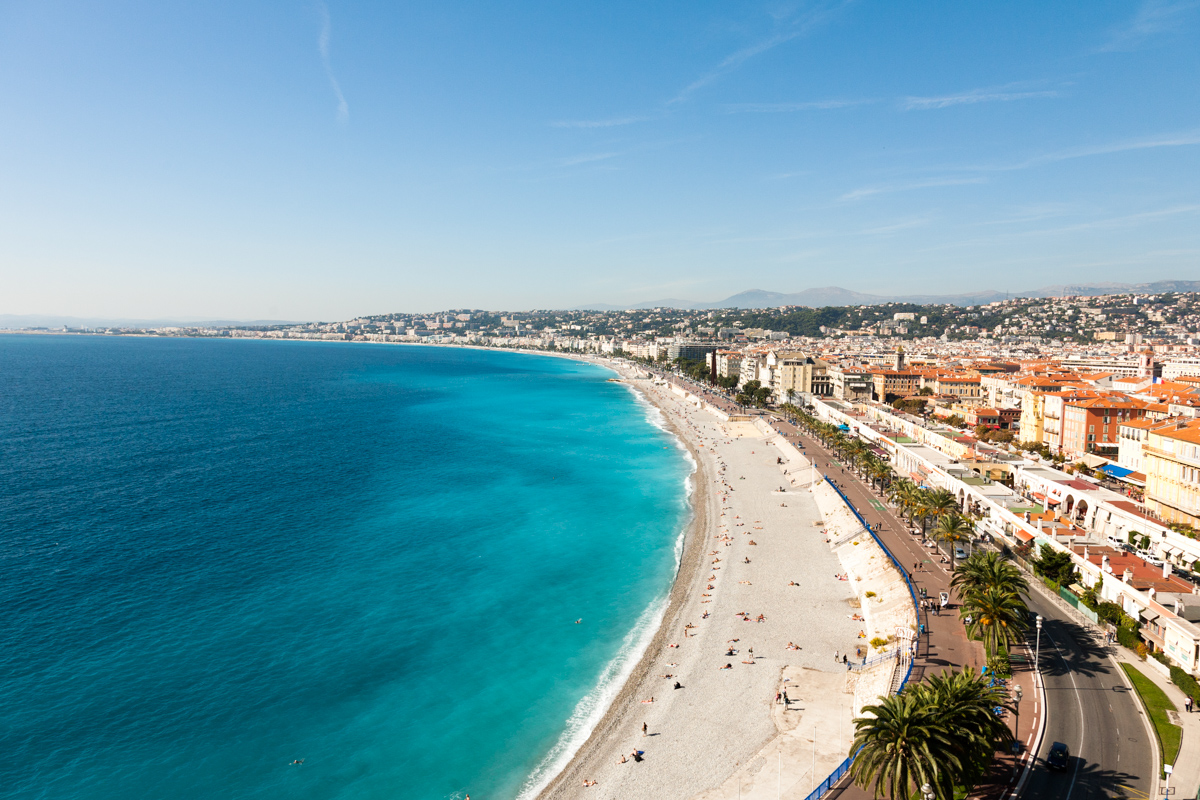 It’s also interesting looking down at the sun baked roofline from above.  Depending on the time of day you can get some stunning colours. 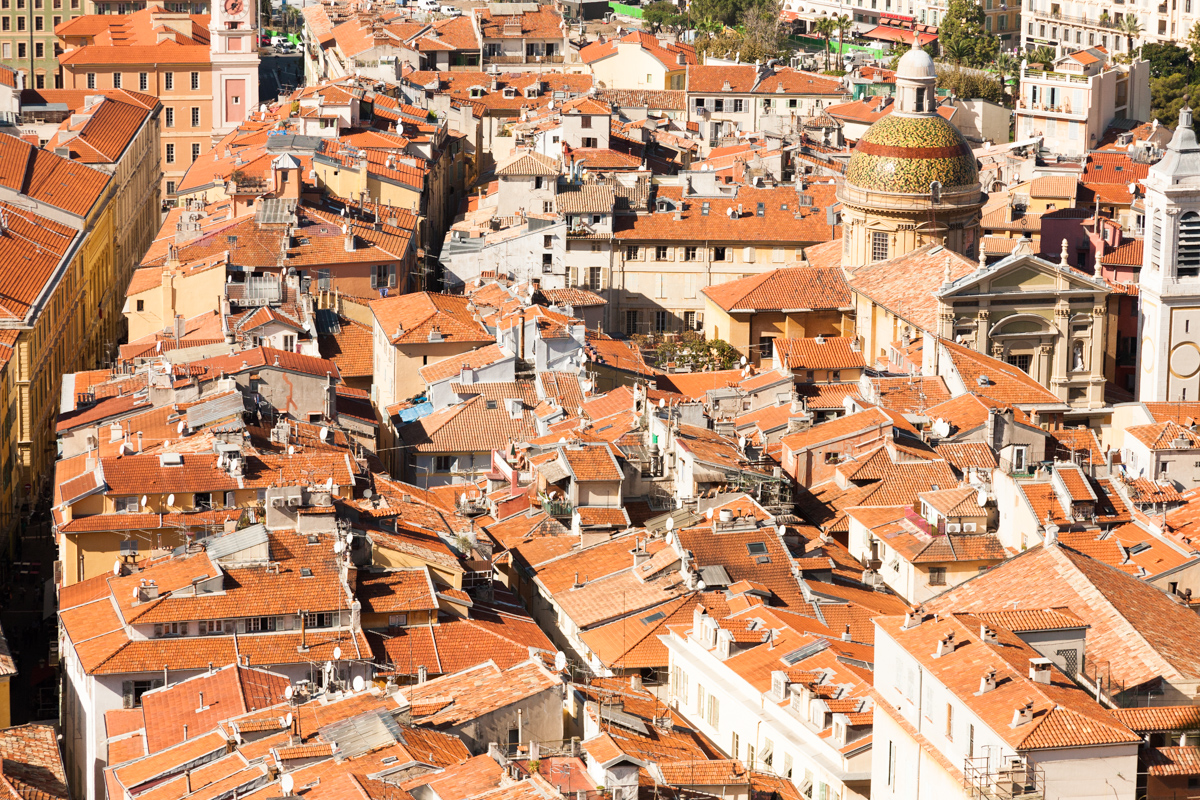 There were some interesting mosaic fresco’s in the park on the hill.  I liked the colours and simplicity. 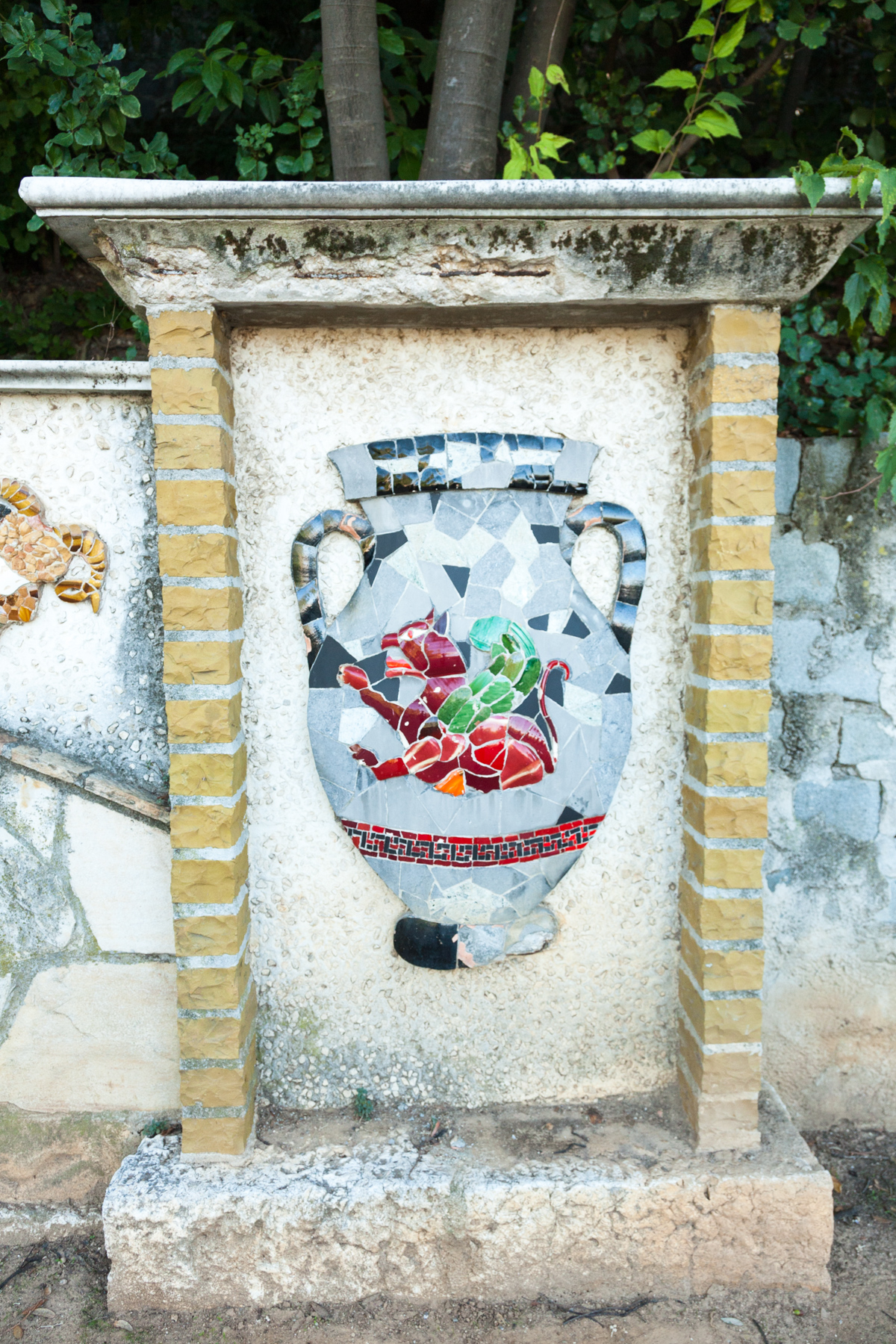 Down the hill on the other side is the Monument aux morts de Rauba-Capeù which is a memorial to the dead of the first world war.  It’s an austere and starkly presented memorial. 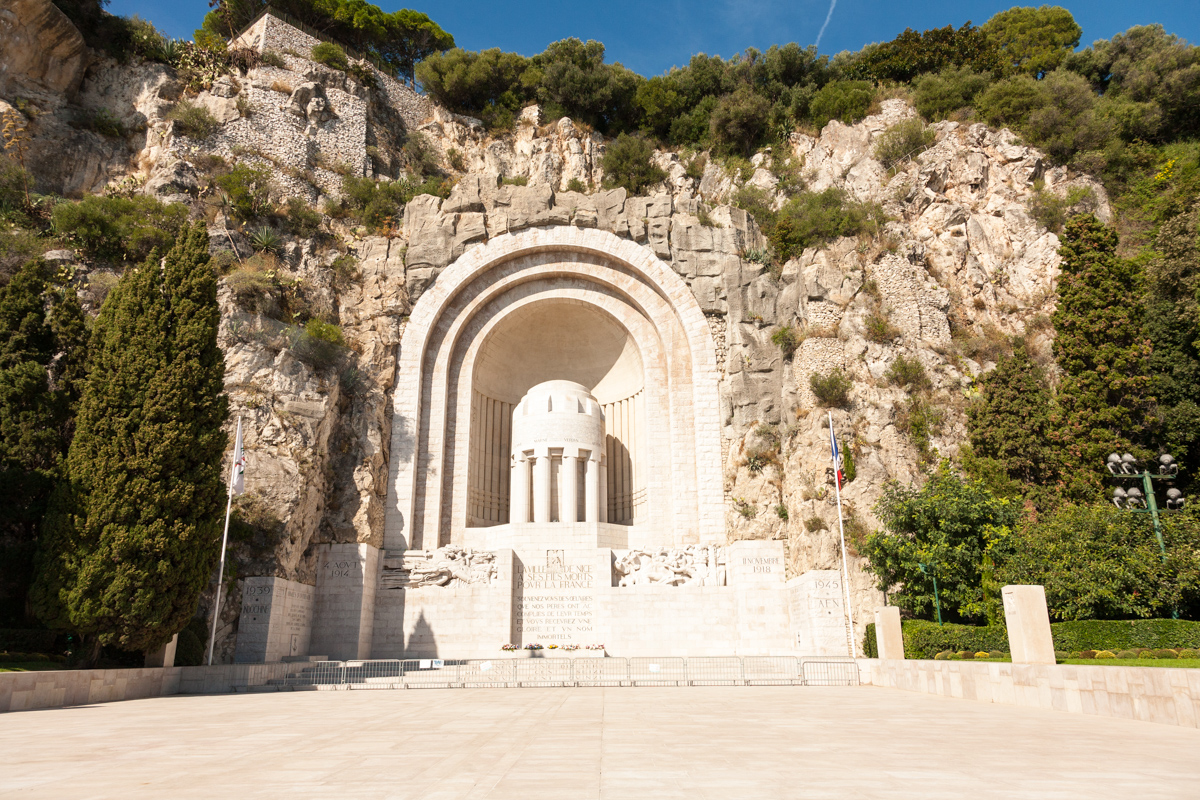 There are plenty of places to eat, if you ask at your hotel or duck down a side street you can dodge the tourist traps.  Although the food in the tourist traps is still very good and worth checking out.

Place Masséna was adorned with giant glowing resin buddha statues, on sticks.  Apparently these are the work of Jaume Plensa, a Spanish artist.

There are seven avatars on poles representing seven continents and the communication between them. The piece is called “conversation à Nice”. The statues are illuminated every night and the colours smoothly and gradually change as the trams whoosh past. 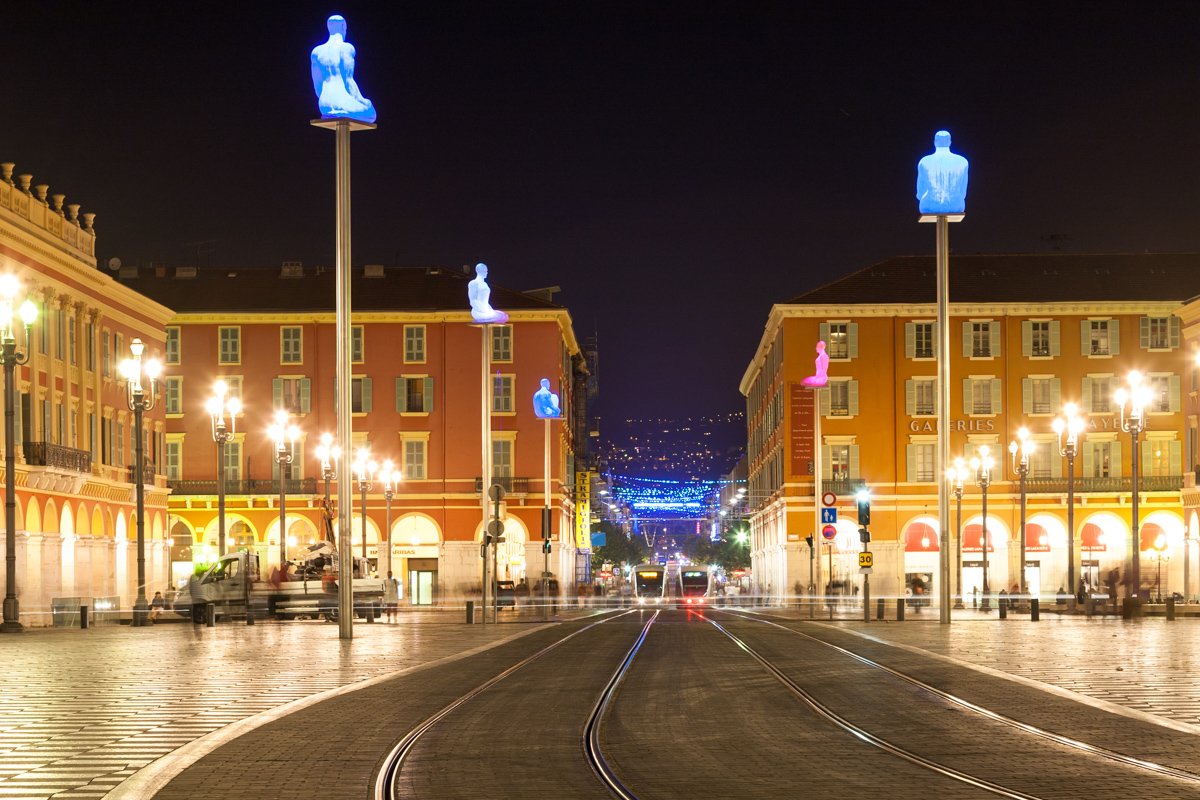 This long exposure has a tram swooping past with a small flare of electrical arcing.  Works well with the background statues I think. 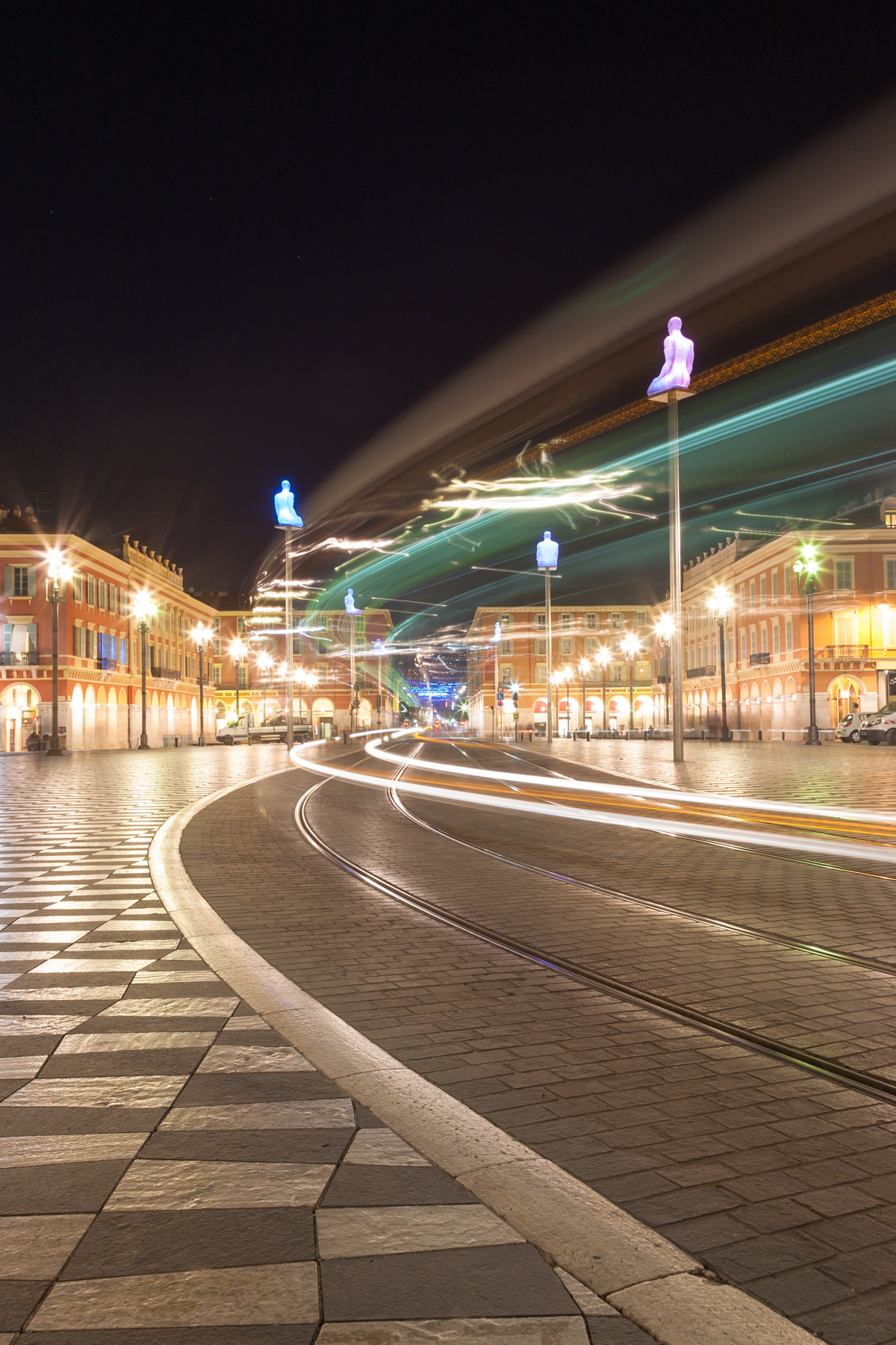