Although Barra is a beautiful island, there is some ugly history beneath the surface.   We visited the ruined village near Balnabodach on the east side.    Here you can see the ruins of several blackhouses, one recently excavated and the rest remaining as untouched grassy mounds, with flooded machair in the foreground. 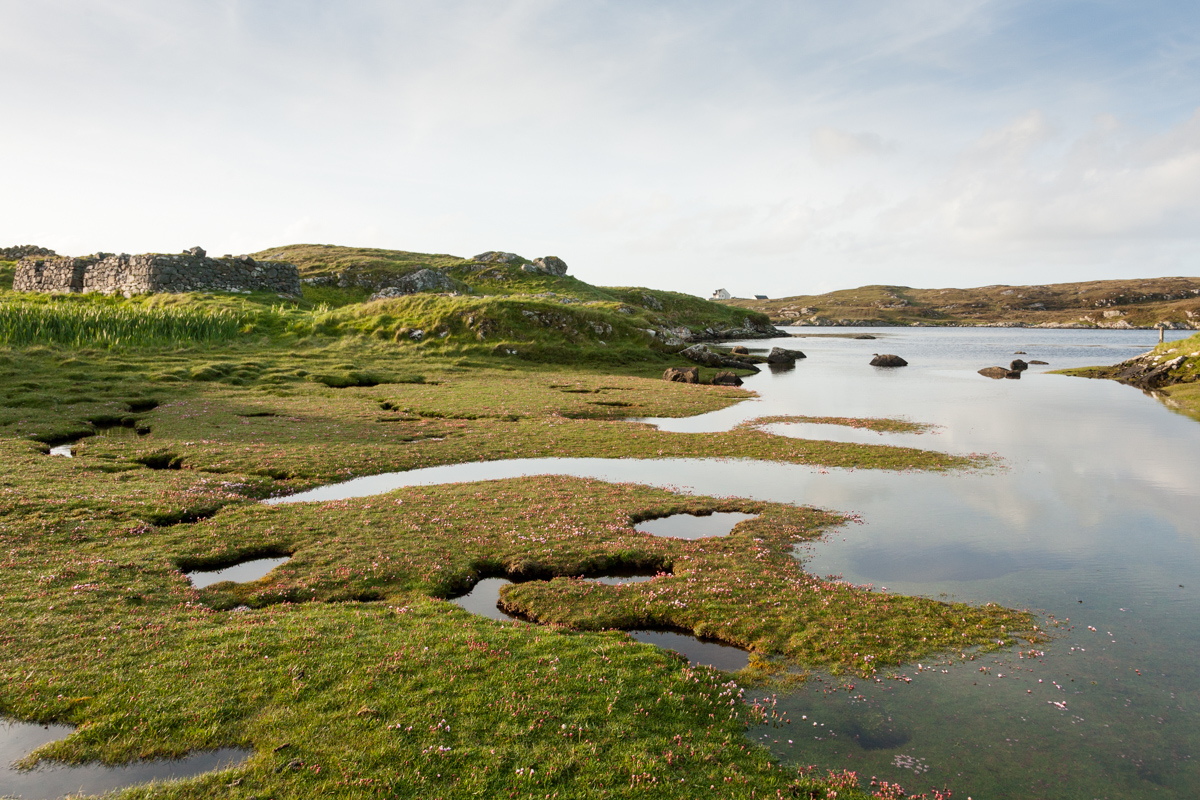 Here is a handy google maps reference to help you locate the village. N.B. this is approximate as the earlier ruined settlements aren’t signposted, you would be well advised to ask at the Castlebay visitors center to get more information, they also have a pamphlet with some details and they are very friendly.

The inhabitants of this village were forcibly evicted by Colonel John Gordon of Cluny in 1850. The villagers were shipped off to Quebec, Canada with no possessions and no assets. Arriving in winter, they faced a brutal challenge to survive and were abandoned to the charity of the Canadian government.

The Isle of Barra website has some more details on the history of the village.

Accounts survive in contemporary Canadian newspapers of their arrival in north America. They were first shipped to Quebec, where The Quebec Times said that they were dependent on charity even for a morsel of bread and their prospects were grim – “the winter is at hand, work is becoming scarce in Upper Canada. Where are these people to find food ?”. They were sent further west, to Ontario, where The Dundas Warder described their condition: “destitute of any means of subsistence, and many of them sick from want and other attendant causes…They were in rags…..shapeless fragments of what had once been clothes”

The census of 1851 shows two important changes. First, not one of the people living here in 1841 remained. Second, the new tenants, who had almost certainly been crofters too in Borve, now had to earn a meagre living from the sea; they are described as boat builders and fishermen.

So the events of 1851 were traumatic indeed at Balnabodach. Eight families were forcibly put aboard ship and sent three thousand miles across the Atlantic where they were thrown onto the mercy of the colonial administration. Eleven families were uprooted from Borve and dumped here and told to become fishers and boat-builders.

A view from the window of the blackhouse of the sea loch where the clearance boat would have been.  It’s hard not to think of the drama and the suffering.  This happened during the time of the potato famine and, no doubt, Colonel Gordon believed he was doing his tenants a favour. 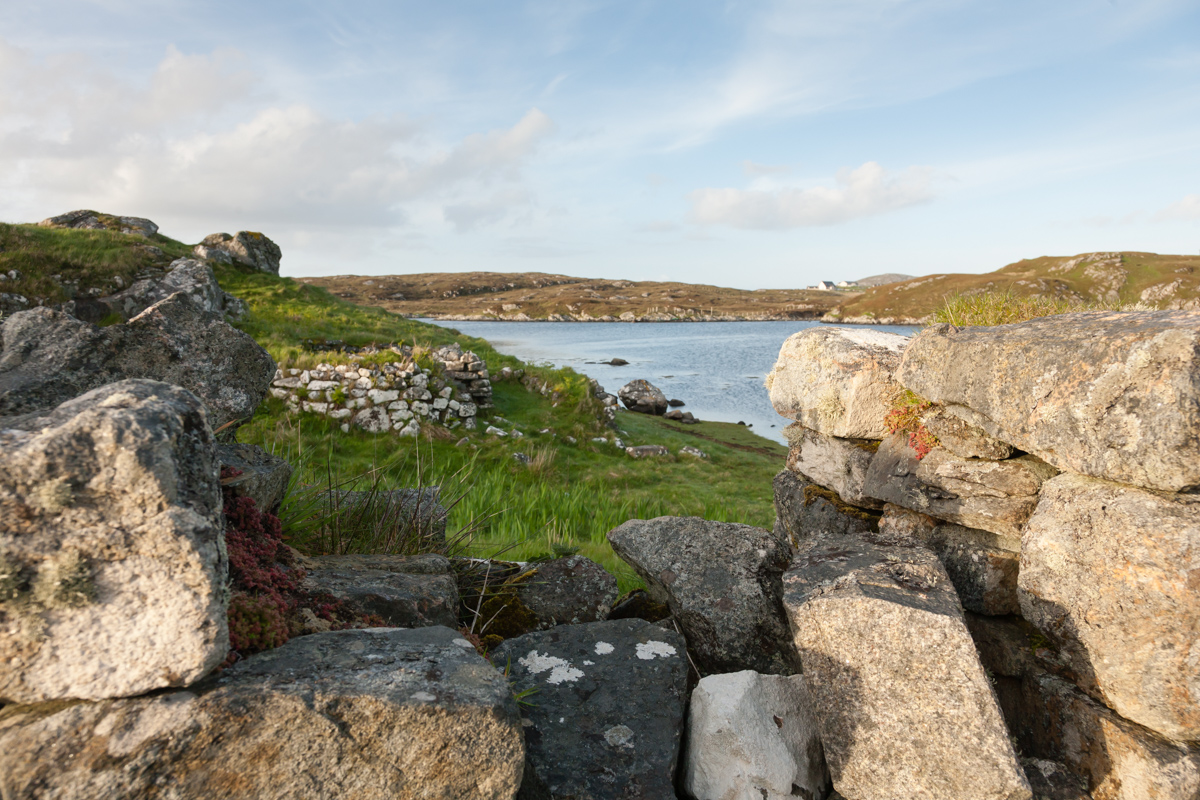 Looking up the hill inland into the setting sun.  It’s worth remembering that the islanders are a hardy lot and have survived many threats, including rapacious landlords, to prosper. 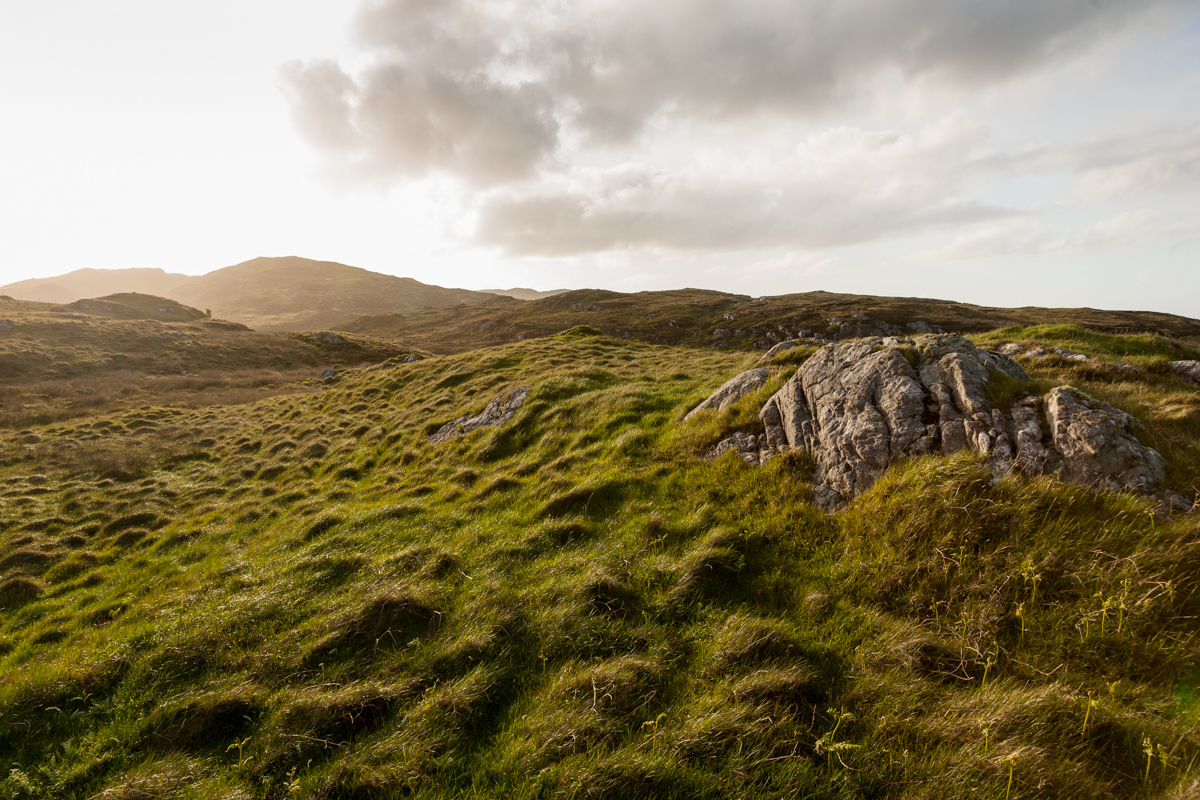 Not far from here you can see Barra airport which, due to a shortage of suitable flat land, uses the beach at low tide as a landing strip.  Arrival and departure times are dependent on low tide.  In the airport is also one of the best cafes on the island and well worth a visit if you fancy a coffee.  The cafe is not tidal fortunately! 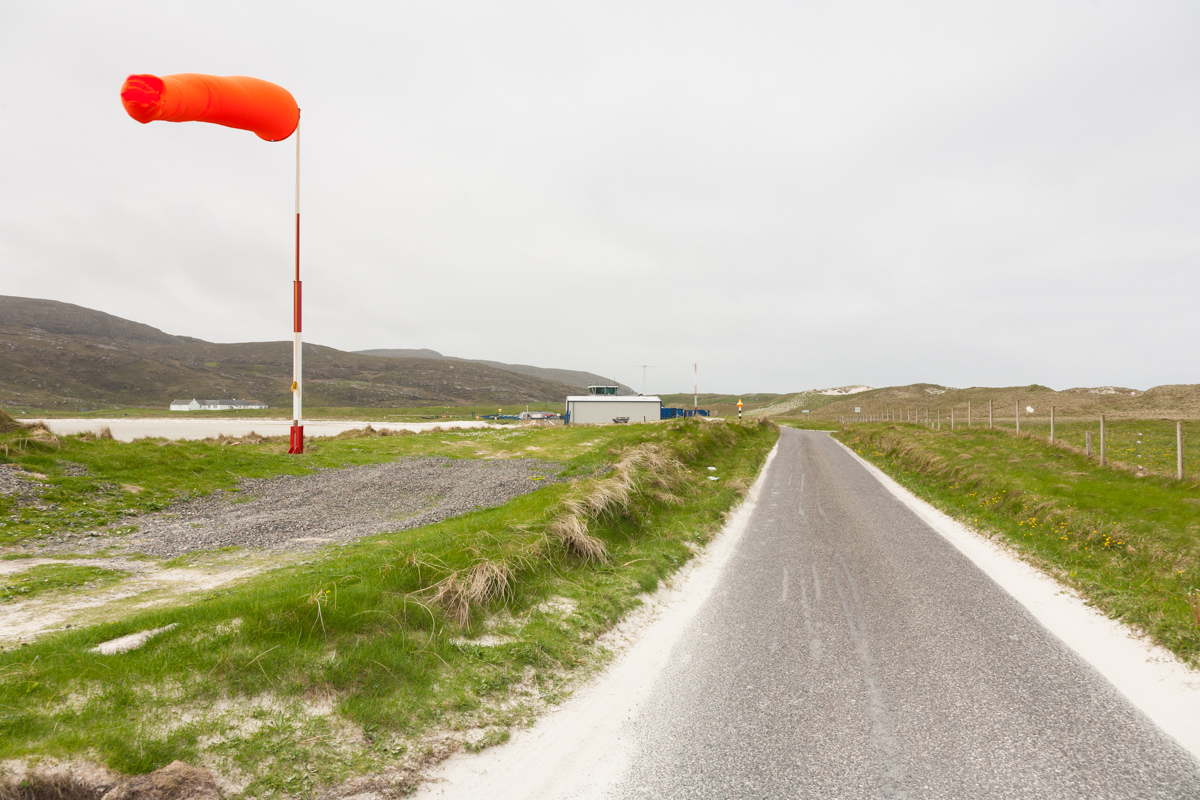 The landing strip itself.  Plenty of taxiways to pick from.  Just avoid the ones with hidden boggy patches.  Fortunately the airport ground crew helpfully mark the landing strip just prior to low tide.  This reduces the number of planes they need to haul out of the sand which makes everyone happy. 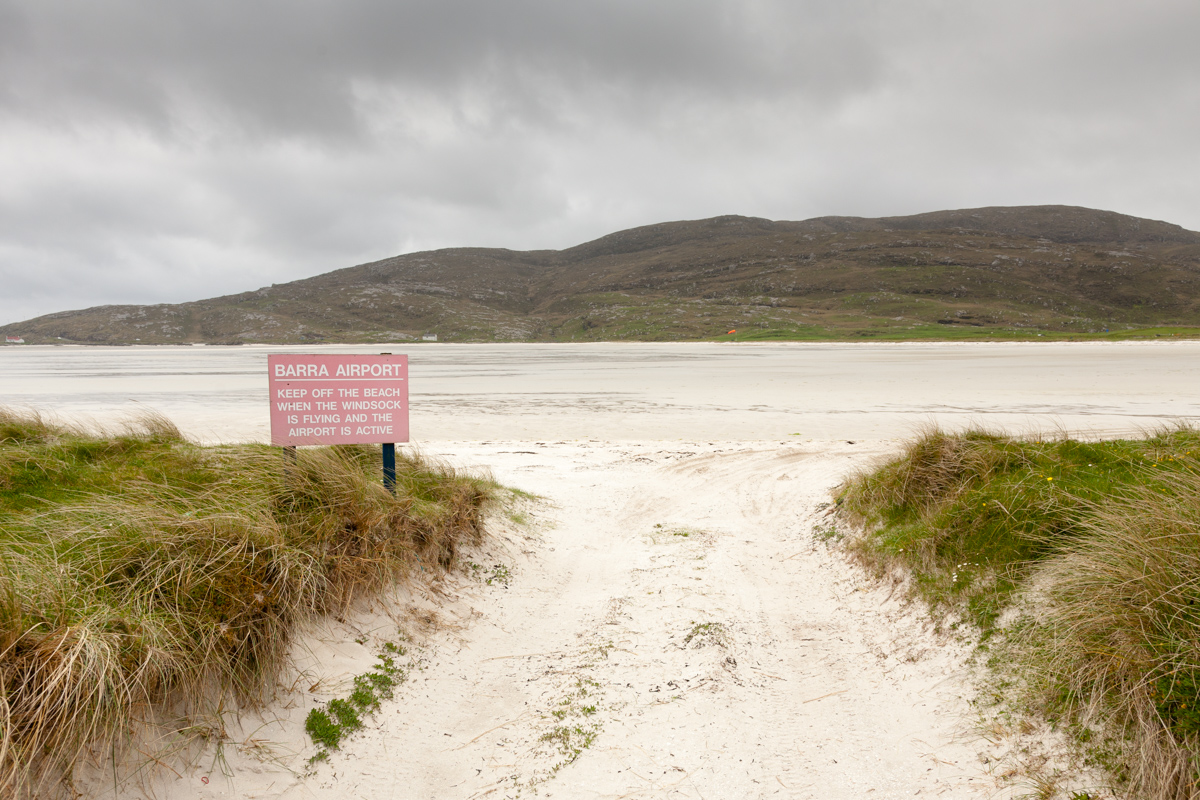 The beach just around the coast is also beautiful.  This is at low tide and you can see a vast expanse of sand. 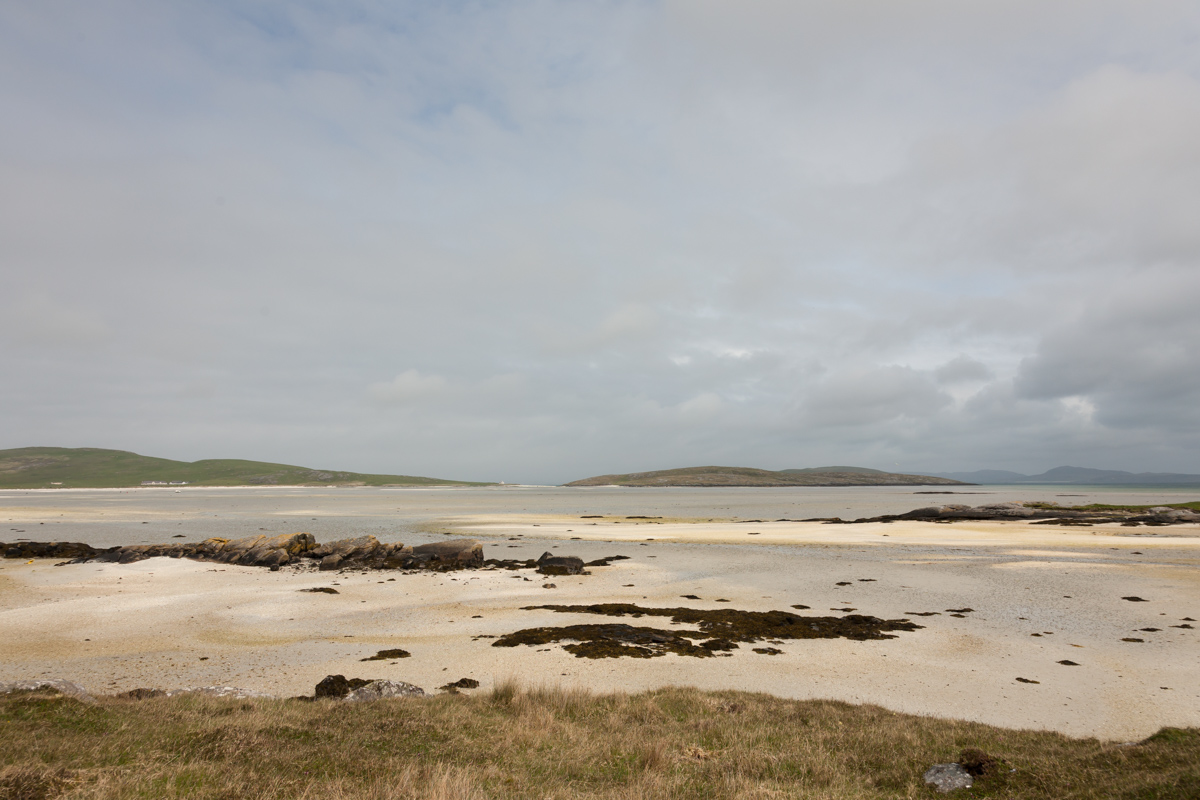 This can provide an interesting landing and take off on windy days.  Fortunately there is a wind sock so you can tell if it is windy or not prior to take off.  If you can’t see the wind sock it is probably slightly too foggy, or raining too hard, which is good because then you won’t need to worry about the wind! 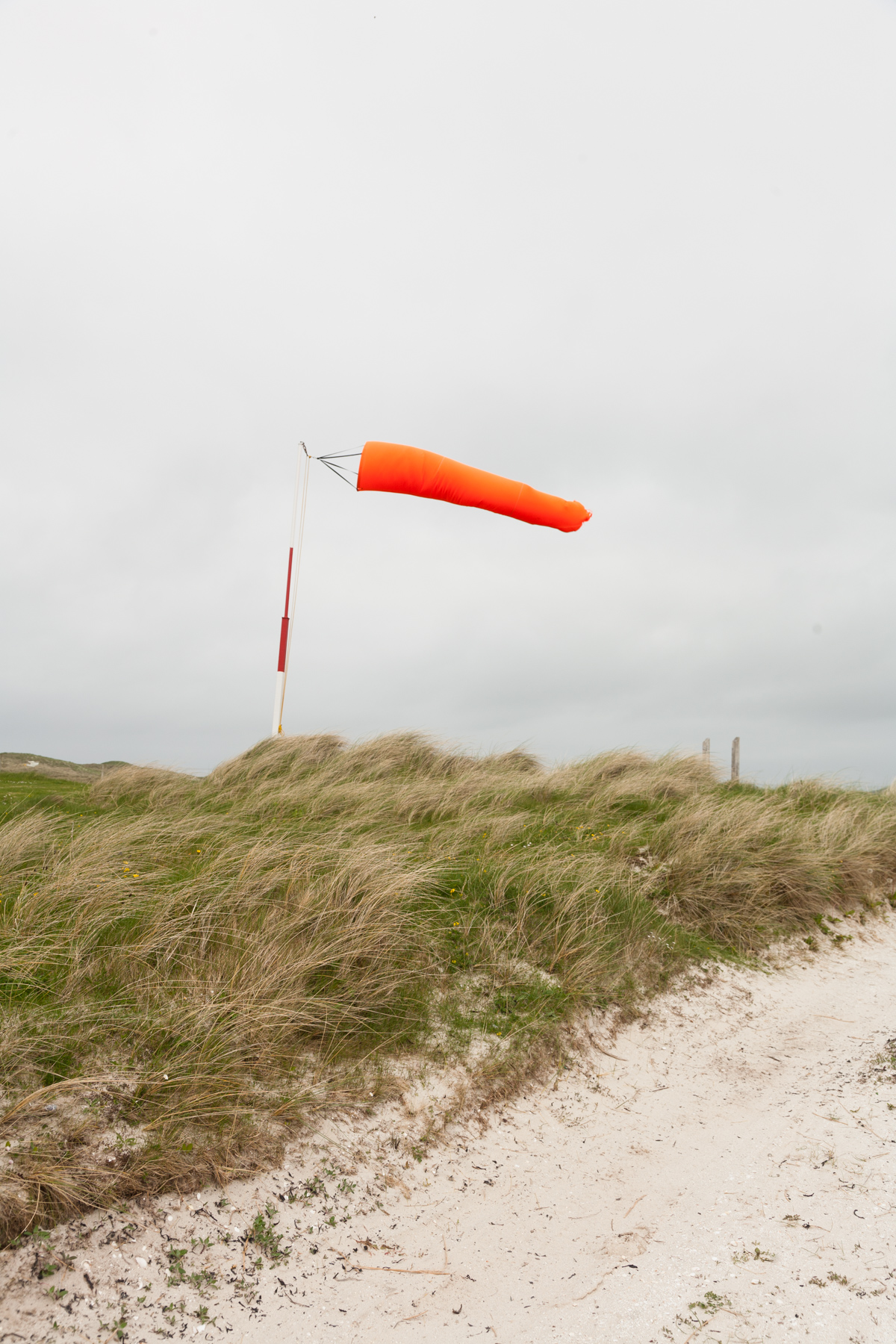 This is a shot of the road on the way to the airport.  This may give you a feel for the island’s charms. 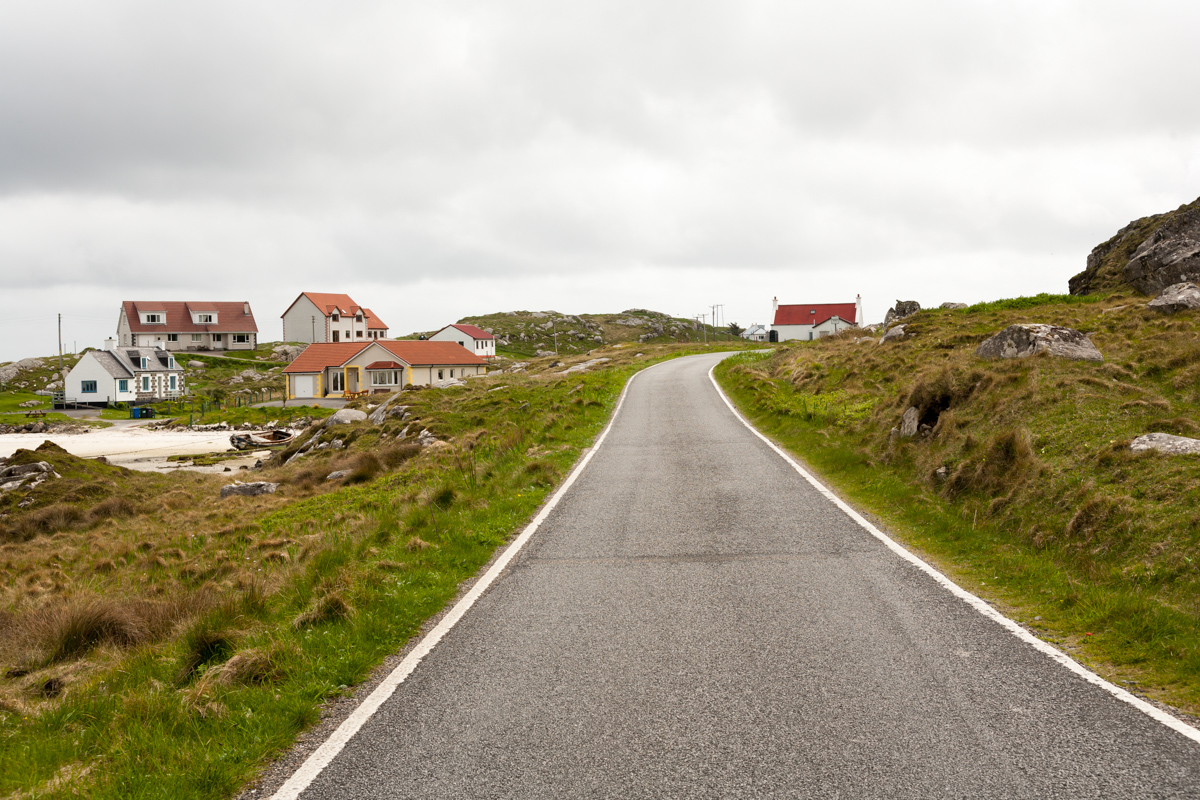